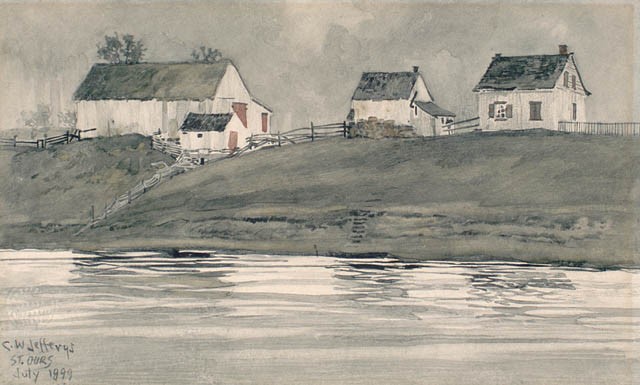 Let’s turn our attention to the life of our ancestor Joseph Valentin who would later marry Marie Louise Duhamel. He was the third of eight children born to Joseph Valentin dit Gregoire and Marie Anne Dallaire. In fact, he was the only son of this couple, so it’s hard to imagine that he was not the centre of attention at home. His older sisters were Marie Anne and Marie Julie. When he was three, another sister, Marie, was born, followed by Marie Modeste in 1829.

In 1828, Joseph’s future wife Marie Louise Duhamel was born to André Duhamel and Marie Louise Dupré. Eloise (as she signed her name) was the oldest of 10 children born to her parents. Of these, seven would survive to adulthood. Eloise soon had a baby brother in 1831, Octave, who died five months later. Another baby brother, born in 1834, was also named Octave.

The Duhamels lived a short distance downstream from the Gregoires in 1831, closer to St-Roch than St-Ours. From the 1831 census, we know that Joseph Valentin had more land and both families seem to have been successful in growing crops and raising livestock. The Valentin dit Gregroire family were neighbours of Joseph Comeau and Marguerite Chapdelaine. The grandchildren of these two families (Albina Gregoire and Joseph Comeau) would marry in 1879.

A cholera epidemic in 1832 claimed many victims and St-Ours was also hard hit. Most affected were the elderly and children, as were many adults. Between May and September, St-Ours held 46 burials due to the illness. Fortunately, the Valentin-Gregoire and Duhamel families seemed to have escaped the effects of the epidemic.

In 1835 and 1836, two more sisters were born in Joseph’s family–Florence and Eloiza. Florence would later live in Spencer, Massachusetts, but nothing is known of Eloiza after childhood.

Eloise Duhamel also gained a sister in 1836, Antoinette, who would only live to be 13 years old. Eloise very likely attended school in 1837 as we know she was literate. At that time, François Hughes was the schoolmaster at La Fabrique. It’s unlikely that Joseph attended school, as all his life he was recorded as being unable to sign his name.

Both families were residents of St-Ours during the 1837-1838 rebellion in Lower Canada. As far as can be determined, neither were actively involved in the movement as neither Gregoires nor Duhamels appear in records on either side of the divisive issue of political reform.

Both families continued to grow after the troubles ended. Eloise’s family welcomed Philomène in 1838, Clement in 1841 and Eleonore in 1843. On the Valentin-Gregoire side, a new sister Josephine was born in 1840 to complete their family. Their happiness was short-lived because on Sept 18, 1843, Joseph’s mother Marie Anne Dallaire died. She was survived by her husband, and most of their eight children:

It does not appear that Joseph (père) remarried after his wife’s death, even with a young child in the household. Perhaps caring for the younger children became the responsibility of one of his older daughters.

Joseph (père) was a farmer all his life and his son followed in his father’s footsteps, probably working the same land when his father retired around 1862.

As Joseph (fils) was reaching adulthood, construction of a series of dams and locks on the Richelieu River was taking place, opening transportation links to Montreal and New York. The 10th lock in St-Ours was completed in 1849. As a result, St-Ours was booming – becoming a municipality in 1845, acquiring a water-powered flour mill, expanding the school system, and establishing a fire brigade complete with pumper. By 1847 the population of St-Ours had reached 3,600.

The last three of Eloise’s siblings were born around this time. Leopold or Leonard in 1845, Elisa in 1847 and François Xavier in 1850.

There was more sad news for Joseph’s family, though. The family patriarch, Louis, Joseph’s grandfather, died at the age of 77 in 1848.

In 1850, a year marked by severe spring flooding in the St-Ours area, Joseph prepares to settle down. His father arranges to donate some property (presumably some farmland) to him in a notarized transaction made on January 26, 1850. A couple of days later, Joseph agrees to a marriage contract with Marie Louise (Eloise) Duhamel. Both documents are handled by the notary Paul-Narcisse Leclaire. On February 4, 1850 they are married in St-Ours. The ceremony was witnessed by their fathers, Joseph (père) and André Duhamel, both of whom could not sign. Also in attendance as a witness was Capitaine Pierre Comeau, the brother of Paul Como whose son Joseph would later marry their daughter Albina Gregoire.

Less than a year later, Joseph and Eloise’s first child Rosalie is born. Rosalie is the first of 11 children born to this couple, all of whom reached adulthood and married.

The census of 1852 is considered to be the first “thorough” Canadian census and it included Canada West, Canada East, New Brunswick, Nova Scotia and Prince Edward Island. Unfortunately, the records for St-Ours in the 1852 census are missing, so it’s hard to know the status of the Valentin-Gregoire and Duhamel families. A Joseph Gregoire is listed in St-Jude as cultivateur, but not the members of his family, which should have included Eloise. In fact, there are several entries for Joseph Gregoire in St-Jude – none of them fitting what we know about Joseph & Eloise. We must assume that our Valentin-Gregoire/Duhamel family were listed in those missing St-Ours records.

It had been about 60 years of British rule after the conquest of Québec, and there began to be rumblings of political discontent. In both Upper and Lower Canada, electoral corruption, the ideals of republicanism vs. colonial rule and securing French rights led to open rebellion. For a 10-year old boy, the pivotal events that unfolded in the Richelieu region instigated by the Patriotes and Fils de la Liberté could only have been interpreted as heroic and exciting.

During the election of 1834, Louis Marcoux, an advocate for the rights of French Canadians, is assassinated in Sorel. The coroner’s jury declared 14 individuals guilty, all but one was tried, and he was acquitted by a Montreal jury. This development further radicalized Marcoux’s friend, Dr. Wolfred Nelson, one of the leaders of the Lower Canada rebellion of 1837-1838.

There is no indication of the political leanings of Paul Comeau or Marie Mathieu’s parents. Being illiterate, they likely formed their opinions by talking about the issues with their pastor, family and neighbours, and not from the newspapers and pamphlets of the day. It’s certain that there was wide-spread concern that the reformists would resort to violence, so Paul’s parents, Joseph and Marguerite, likely cautioned their youngest boys, Paul, Alexis and Jean-Baptiste from hanging around where they had no business.

In May 1837 (a month before a young Victoria ascends to the throne of Britain) a rally in St-Ours, with Dr. Nelson as the principal speaker, was attended by 1,200 people. In the fall, more rallies took place in Montreal and nearby St-Charles-sur-Richelieu followed by arrests for treason and sedition. Three Chapdelaine men are among the Patriotes arrested – very likely relations of Paul’s mother Marguerite. Paul’s brother Pierre, who was in the militia, was likely involved on the government side of the issue. Troops are dispatched to the area on Nov 22, while the Patriotes look for the means to arm their followers.

In St-Denis poorly-armed rebels with reinforcements from St-Roch, Contrecoeur and St-Ours manage to force government troops to retreat to Sorel. Still, 12 rebels and 30 soldiers died. Jean Baptiste Dupré of St-Ours was one of them. Colonel Gore, intent on retaliation, returns with a plan to burn the village of St-Ours to the ground. Curé Belanger’s entreaties to Gore succeeded in sparing the village but the homes of the insurgents are pillaged.

Sentiment begins to turn against armed rebellion and 399 St-Ours residents sign a petition sent to the Governor disavowing the actions of the few insurgents. Joseph Comeau’s name is not on the petition. Many of the instigators flee to the United States and try to keep the flame of revolution alive from afar. By January 1838, the rebellion is over.

Still, the divisive nature of the recent rebellion may have been a factor in how locals shamefully responded to a steamship disaster on June 10, 1839. Passing Sorel in the night on its way to Montreal, John Labatt’s steamer, John Bull, caught fire near Lanoraie and several panicked passengers jumped into the river to escape the flames. A number of local residents came out with boats, not out of compassion but to extort money from passengers in return for rescue. 14 souls were lost in that tragedy.

This work is licensed under a Creative Commons Attribution-NonCommercial 4.0 International License.