First of a seven-part series describing the real and imagined life of Hilaire Béliveau of Montreal.

Norbert Hilaire Béliveau (Hilaire) was born on June 6, 1834 in St-Grégoire (Nicolet), Québec, to Charles Hilaire Béliveau and Eléonore Bernard. Hilaire was not their first child, but the first to survive infancy. In 1832 a sister, Marguerite Odile, died a scant three days after her birth. Hilaire’s godparents were his grandmother, Marguerite Bourq, and Antoine Desrosiers. At the time of Hilaire’s birth, his father was a farmer in St-Grégoire – a village that counted a sizable population of Acadian refugee descendants.

These Acadian refugees (most were from Beaubassin) found their way to the Bécancour region from about 1758. They founded the village of Ste-Marguerite, later known as St-Grégoire. Hilaire’s great-grandfather David Béliveau arrived after 1766 with his parents by way of exile in Boston – which makes Hilaire the third generation of his line to live in the area.

In this rural setting, the Béliveau family grew and farmed land that was probably part of the Linctot seigneurie. In 1836 a brother, Joseph William, was born and two years later a sister, Anna. In January 1840, a baby brother arrives – Antoine Ephrain. He will live to be 81. Another brother, Narcisse Camille, arrives very quickly after Antoine in September 1840.

Hilaire’s grandfather, David Béliveau, died in St-Grégoire on October 20, 1842. He was 68 years old and lived and farmed his entire life in the Nicolet area. Another brother to Hilaire is born, Théodule, in December 1843. In October 1845, Joseph Uldéric joins the Béliveau family in St-Grégoire and is baptised the following day sous condition which means it was likely he was baptized by the midwife or other authorized person before the ceremony could be performed by a priest. This is sometimes the case if the newborn had a difficult birth or seems to be at risk of not surviving before a proper baptism can be done. He is followed by Louis Pierre who is born on September 1, 1847, then Jean Baptiste on September 29, 1850. Artemise is the youngest and was born around 1851.

Hilaire and Célina Cadotte (his future wife) are the first generation in their families to have been educated, both their parents were illiterate. It’s possible that Hilaire attended the Nicolet Seminary at some point (founded in 1803), a top-tier institution. That Hilaire received an education is in itself remarkable and seems to have bucked the prevailing view of farmers – especially in Nicolet – of paying taxes to fund public education.

La Guerre des Éteignoirs was a movement that took hold in 1836 to protest the closure of over 1600 schools in Lower Canada. From 1836 to 1841, organized schooling was practically nonexistent. The only schools to remain open were subsidized by Fabriques (parish building committees). The government wanted to restructure the public school network and fund it with taxes. As a result, many parents took their children out of school in protest and refused to pay the taxes or elect school boards.

In 1850 tensions rose when a new school tax law is imposed on taxpayers regardless of whether they have children attending school. Fanning the flames of discontent are politicians and leaders of the Éteignoirs who try to link the issue to the plight of Irish refugees escaping the famine. The tactic hits home in Nicolet where a large contingent of Irish refugees settled.

In 1851, as the embers and hostilities of the Éteignoirs movement die down, we find Hilaire and four of his brothers are attending school. They didn’t have far to go – their neighbour in St-Grégoire, Joseph Paré, had a schoolhouse on his property, so it’s likely that’s where they went. By 1857 a boys’ school and a girls’ school were established in St-Grégoire.

Returning to 1836, the Éteignoirs movement wasn’t the only cause of public discontent. The Patriote rebellion found supporters in the Nicolet area with assemblies and confrontations taking place between Patriote sympathizers and loyalists. Two local men were arrested in connection with the Patriote movement but were later released. To restore calm in the region, the government sent officials to Nicolet where they also took oaths of allegiance to the Queen from over 800 Nicolétaines. 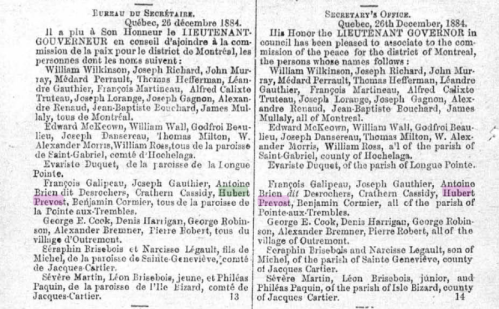 This site uses Akismet to reduce spam. Learn how your comment data is processed.

This work is licensed under a Creative Commons Attribution-NonCommercial 4.0 International License.